Getting to Know Lena Liu
A Personal Look 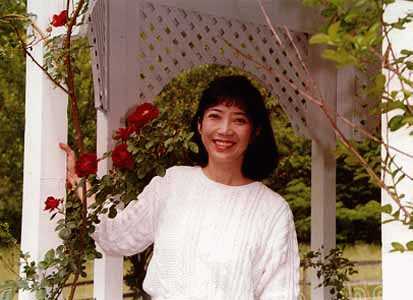 As her collectors know, Lena Liu loves flowers and as you might have guessed, gardening is one of Lena Liu's favorite pastimes. She does have a vegetable garden, but she especially loves flower gardens and has several of them in the backyard of her home in Potomac, Maryland. Among her favorite flowers to grow are bearded irises, roses and peonies.

Lena enjoys spending time in her flower gardens and she frequently gets inspiration for her paintings from her backyard gardens. In fact, she can often be found kneeling among the flowers with a sketch pad in hand. She sketches the natural beauty of the uncut flowers at their many different stages of bloom.

Lena Liu and her Pets

Lena has two dogs -- a dalmation named Versal and a beagle called Dixie. They often keep her company in the studio while she paints. In fact, when she is home, they love to follow her almost everywhere she goes. They even seem to enjoy watching her sketch in the backyard. As she sketches they watch over her shoulder and wait patiently for her to finish so they can bark their approval.

Since Lena doesn't have any children, she tends to consider her pets almost like her children. Versal and Dixie don't mind at all. They enjoy being such an important part of Lena Liu's family.

In June 1997, Lena Liu traveled to Chicago, Illinois, for the annual Rosemont Collectibles Exhibition there at the Rosemont Convention Center. The show lasted four days with the last two being "collector's days." While she was there, Lena divided her time between Imperial Graphics' booth and the Bradford Exchange booth. During the show, the Bradford Exchange presented Lena with an award for "Artist of the Year."

Lena truly enjoyed meeting the collectors. She was available to sign pieces that they brought from their home collections and answer questions. The collectors really seemed to enjoy talking with her and telling her about their collections. Lena was very flattered with all the attention.

To all of Lena Liu's collectors that visited her at the show, Lena wants you to know that she enjoyed meeting you and she wants to thank everyone for taking the time to come out and show their support for fine art and collectibles.

To see more photos of Lena Liu please select one of the following: